HomeNews and EventsNewsMy life was upended for 35 years by a cancer diagnosis. A doctor just told me I was misdiagnosed 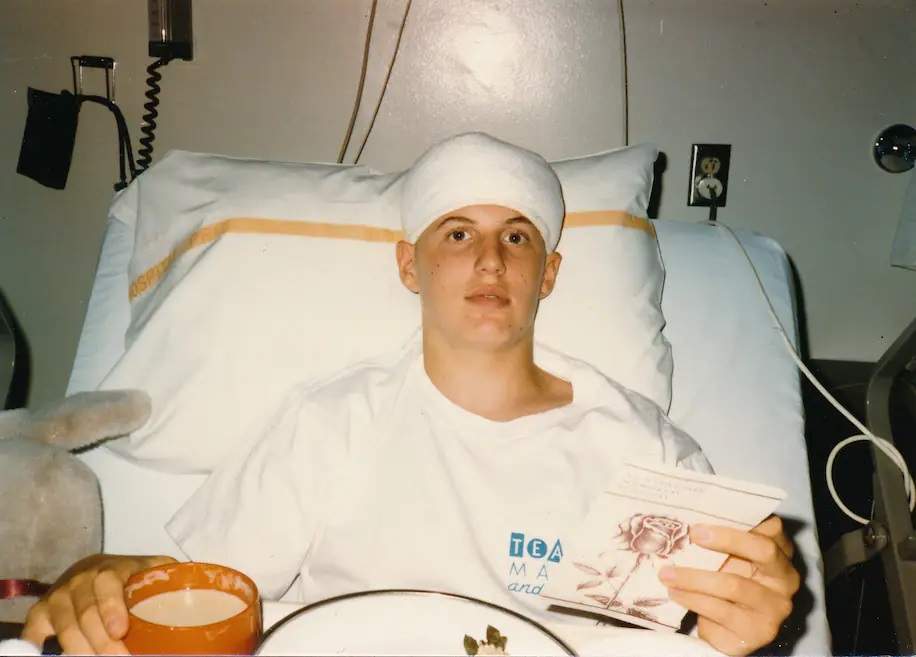 My life was upended for 35 years by a cancer diagnosis. A doctor just told me I was misdiagnosed

Ever since I was diagnosed with brain cancer at age 15, the probability of my survival has been stacked against me. Each birthday was preceded by a moment of dread, and this was the case one gloomy Seattle morning, three weeks before I turned 50. BBC News had featured a story about my teenage health saga on its homepage last year, and my inbox was suddenly full of messages regarding the calamity I’d managed to escape.

Most of the messages were congratulatory. Some praised God for my survival and hoped that I had too found faith. One I received about two months ago lacked the thematic optimism of the others. It was from a neuropathologist, Karl Schwarz, whose work focused in part on anaplastic astrocytomas, the cancer tissue found in my teenage brain. He said that in his 38-year career, he’d come across only three patients who had “survived well beyond the correct diagnosis-mandated bleak life expectancy; upon review, in two of them the diagnosis was erroneous.”

He finished his email, the language of which I found somewhat awkward, with a request for a phone conversation. I responded that I would soon get in touch.

We spoke the following week. With an Eastern European accent he said, “After the delay, I did not expect this call to transpire.” He seemed irritated. I waited. “I felt compelled to reach out because it is simply so unusual that you survived anaplastic astrocytoma.”

“So I’ve been told.” I’d seen dozens of neurologists over the years at some of the top medical institutions on both U.S. coasts. They had all said essentially the same thing. The average life expectancy for a brain tumor like mine was two to three years.

“And yet despite this being extraordinary, you nevertheless believe that this is what you have managed to survive?”

My head jerked back. “Excuse me?”

I was close to hanging up. “What exactly are you asking me?” I said.

“I am sorry. I am perhaps not clear. English is not my first language.” He paused. “May I share a story with you?”

I sighed and rolled my eyes. “Tell me your story.”

He spoke of a case settled before trial where he was hired as an expert witness on behalf of a plaintiff arguing that doctors had misdiagnose her brother. The man, a computer science professor in Boston, had a seizure that led to the discovery of a tumor. The tissue was studied. A diagnosis of cancer was made. He was told he wouldn’t survive a year and a half, even with the intense radiation he had opted to undergo. The treatment permanently damaged his brain, but he was alive four years later, leading to a revisiting of the original diagnosis. “I share this story because your survival of anaplastic astrocytoma is so unusual, so uncommon, that the diagnosis itself begs to be revisited.”

We spoke for nearly two hours. I needed to assess his credibility; he felt the need to be sure of mine. We traded questions. His had been personal, so I didn’t hesitate with my own interrogation, starting with his family background. He was born in western Romania shortly after World War II to a German-Hungarian family, immigrated to Israel when he was 12, and later started medical school before continuing his studies and career in the United States. He is now a retired neuropathologist based in New Jersey.

He asked in depth about the car accident that preceded the discovery of my brain tumor, the neuropathologists involved in my diagnosis and the medical facilities in California where I received treatment. I answered him honestly, my initial irritation having given way to cautious curiosity. Though I didn’t mention it as we spoke, I had managed to extract my medical records from a basement file cabinet. “I’ll see if I can find those records,” I told him as our conversation came to a close.

“I would be happy to review them,” he said, his voice having softened, “if you would find that helpful.”

The moment we hung up, I fell back into my desk chair, my eyes shut tight. I remembered how enthusiastic my neurosurgeon seemed the day after my surgery in 1986, when after a brief conversation she asked me to stand, despite the drain tube in my head. “Your balance is normal. So is your speech. You look great, kid. The surgery went really well.” I asked her if I had cancer. She said she was still awaiting the pathology report. “As soon as I find out I’ll tell you. But everything looks good so far.”

Ten days later, my post-surgical fog lifted. They had removed the staples from the left side of my head. I felt stronger, more confident. I was eager to go home.

My neurosurgeon showed up that afternoon, with my parents and brother assembled in my hospital room. She spared us small talk. “The tumor cells were cancerous.” I asked her to be specific, to tell me my chances. That’s when she said the tumor was an anaplastic astrocytoma, and that the survival rate for this cell type and grade was low. She bit into her lower lip after saying that. It was clear she didn’t think I was going to make it.

I opened my eyes and returned to the present. On the table in front of me, I laid out the detailed records my mother had so carefully organized and kept over the years. She had handed them over when I was 40 and beginning research on a memoir about my cancer experience. In one package was my treatment protocol: intensive brain radiation for six weeks, followed by six sessions of chemotherapy drugs to be delivered over the next year. My immune system responded poorly to chemo, so the therapy had dragged on for an additional six months.

In another section were my mother’s handwritten notes, with every detail of my conversations with doctors recorded. My mom had been a court reporter, so her notes were more like transcripts. Then there was the hospital report, tucked into a section of its own.

Several pages in was a sheet from my local hospital dated Aug. 9, 1986, with the title SURGICAL PATHOLOGY. At the bottom it had the diagnosis “pilocytic astrocytoma (spongioblastoma),” a benign tumor.

Then I came upon a third report, dated a week later and mentioning consultation with a neuropathologist from a top-notch university. It had a completely different diagnosis, the only one I’d ever known: “Highly anaplastic, high grade astrocytoma,” a rare and aggressive cancer.

My hand flew to my chest. For several seconds, I found it difficult to breathe.

I called Schwarz. “You’ve found your records,” he said. “Read the pathology reports to me.”

He intervened the moment I finished the first report. “Your diagnosis — pilocytic astrocytoma — is a benign tumor. Why did you undergo radiation and chemotherapy?”

I read the second report, dated Aug. 10. “That is the same thing,” Schwarz said. “A benign tumor. The doctor has merely added a categorization for the tumor type. It is still nothing cancerous.”

“There’s a third report,” I said, my voice cracking.

I read it to him. When I finished, he let out a long sigh. “This is the completely false diagnosis. It did not take place at your local hospital. Someone wanted a second opinion from a respected institution. The findings were sent to such a person. But in any case, he was wrong.”

No words came out of me. I felt the urge to scream and momentarily muted my phone. Tears came instead.

Schwarz sensed that I was suffering. “Your story is important.”

“Either outcome is deeply meaningful. If you survived anaplastic astrocytoma, then you are the outcome of a miracle of biblical proportion. If an erroneous diagnosis was made, which I think is what happened, then yours is an important cautionary tale. Pathologists, like everyone else, make mistakes.”

His words didn’t soothe me. I’m not sure any could. I thanked him and told him I needed to go.

About a third of Holocaust survivors in the U.S. live in poverty. This group helps them.

In the weeks since Schwarz delivered his diagnosis, I’ve found myself replaying it several times each day. I took him up on his offer to provide a formal, written review of my pathology reports, hoping to get a clearer picture of what happened, how a mistake could have been made. The first two reports, the ones that came from pathologists at my local hospital, provided concrete evidence that my tumor was benign. The outside opinion delivered in the third report was an absolute reversal — and offered no evidence at all. “I can’t explain it,” Schwarz wrote. “It is a completely incongruous non sequitur to everything that had transpired before.”

I looked into whether I had grounds for legal action against the hospitals where I was treated, including the one that pummeled my brain with radiation without conducting its own assessment of whether my tumor was cancerous. But the deadline for a medical malpractice lawsuit in California passed more than three decades ago, and it’s likely the tissue slides that hold the definitive answer to whether I was misdiagnosed no longer exist. The three pathologists who examined my tumor and made their diagnoses, two in agreement that my tumor was benign, and one in dissent that it was an aggressive form of cancer are no longer in practice.

Schwarz is strongly of the opinion that the cancer diagnosis was wrong. I believe him. The best evidence in support of his argument is the fact that I’m alive. People with anaplastic astrocytomas do not survive long — certainly not 35 years. I’m no medical miracle. In a sense, I’m more like a mistake.

“Cancer has never been part of your story,” Schwarz told me.

But that’s where he’s wrong. Cancer has been central to my story. While I’m sure Schwarz meant to console me, his words have instead opened the floodgates to deep and painful emotions: fierce feelings of rage followed by floods of grief.

I wrote out a list of the consequences of the misdiagnosis. Brain radiation damaged my vision, my hearing and my hormones, and its long-term effect on the scar tissue in my brain is possibly why I’m epileptic. Chemotherapy harmed my lung function.

The near certainty of my early demise filled me with fear, not just until I’d beaten the odds, but every time I had a headache, every time I’ve been stuffed into a tube for another precautionary MRI, waiting to hear that I’m clear for a year or two.

My diagnosis wreaked havoc on each member of my nuclear family, harming them, hurting them, for many years. There was so much to be angry about. So much to grieve.

In the past few days, a third emotion has appeared. Slowly, deliberately, it is weaving its way into the emotional assemblage that dominates me. For 35 years I was afraid my tumor would come back — that the cancer would kill me. It’s seeping into me now, for the first time, that the cancer likely never was. In this, I find a modicum of relief.

I do hope that will grow.

Jeff Henigson is the author of the YA memoir “Warhead: The True Story of One Teen Who Almost Saved the World.” 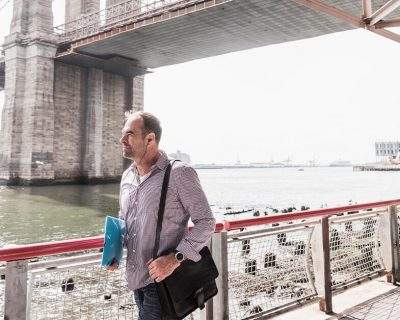